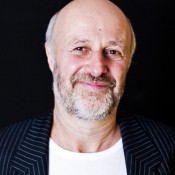 J David Simons is the author of five novels, as well as several short stories and essays. The Credit Draper was shortlisted for the McKitterick Prize and he has received bursaries and writing fellowships from three prestigious organisations. His acclaimed novel An Exquisite Sense of What Is Beautiful was published by Saraband in 2013. He is also the author of The Liberation of Celia Kahn, The Land Agent, The Credit Draper and A Woman of Integrity.

Working as a land agent for one of the richest men in the world, Polish-Jewish immigrant Lev Sela stumbles upon a strategic area of land that doesn’t exist on any map. The resultant struggle for ownership involves the Jews, Arabs, Zionists, British, a Russian engineer with ambitions to build a hydro-electric power station and the local Bedouin. The dispute also draws Lev into a relationship with a beautiful Scottish pioneer living on a nearby kibbutz.
Touching on issues of identity, idealism, displacement, community, alcoholism, socialism and feminism, The Land Agent is the third title in J. David Simons’ Scottish-Jewish magnum opus, the Glasgow to Galilee loose trilogy, which follows his award-winning novels The Credit Draper and The Liberation of Celia Kahn.