Books > Fiction > A Woman of Integrity

A Woman of Integrity

Buy A Woman of Integrity from

A beautiful novel about one woman’s obsession with the life of a silent movie star as she struggles to accept life’s compromises.

Finding herself to be on the wrong side of fifty for a female film star, Laura Scott’s career is on the slide. She has an opportunity to reverse this downward spiral when she is offered the starring role in a one-woman play about the life and loves of Hollywood silent screen actress turned pioneering pilot, Georgie Hepburn.

Laura jumps at the chance for Georgie is someone she has admired for her courage and integrity ever since she was a child. But as Laura discovers more about Georgie, she realises there is always a price to pay for integrity – in her own life as well as Georgie’s.

Acclaimed author J David Simons’ fifth novel, this is a subtle and complex exploration of a creative life and the challenges faced when a person’s desire to be authentic comes under pressure.

REVIEWS OF A Woman of Integrity

'A Woman of Integrity is an impressive read from an experienced pen. Beautifully textured Simons' elegiac prose is written with an admirable confidence' Lisa O'Donnell, winner of the Commonwealth Book Prize, author of The Death of Bees and Closed Doors

A Woman of Integrity introduces us to Laura, an actor no longer in the limelight. As Laura's life unravels, a parallel story comes alive through the memoirs of the feisty reclusive silent film star-turned-photographer, Georgie Hepburn, now deceased. As Laura finds out more about Georgie, her life begins to change. A wonderfully readable, well-researched and at times humorous exploration of two women's lives, loves and experiences in the 20th and 21st centuries.' Lisa Ballantyne, author of The Guilty One and Redemption Road

'Laura Scott and Georgina Hepburn are surely real people - so brightly do their passions and complexities burn. From Highgate to Hollywood, and across generations, J David Simons makes troubled, fascinating women speak to each other, and us, about ageing, flawed idols, movies, and theatreland in a rollicking, cleverly connected and thoroughly satisfying plot. Like Nancy Mitford and Helen Fielding got together and wrote a postmodern comedy of manners together - with a captivating historical backstory and stardust thrown in. J David Simons is hilarious and insightful.' Rachel Holmes, author of Eleanor Marx: A Life and co-editor of Fifty Shades of Feminism

'The desire to be true to yourself and to an unshakeable set of values lies at the heart of J David Simons' precisely crafted novel in which he delicately plaits the fortunes of two women… There is a great deal of discipline and rigour in his writing; no chapter is more than a few pages long, and yet he offers enough plot and emotional heft to move everything forward and contribute to a growing sense of a bigger picture. His technique ultimately pays dividends as the twin stories gather towards a resolution that is cleverly handled and satisfying. A Woman Of Integrity is a very civilised, pleasingly unsentimental novel in which Simons confidently assumes the mantle of Elizabeth Taylor in creating nuanced, soul-searching tales of women that are propelled by moral dilemmas and the struggle for self-realisation.' Herald

'...well-written, strong women… I found myself completely taken in with the rhythm of the sentences I was reading… a lovely piece of well-crafted fiction.' -- Erynn Loves Books; 'A Woman of Integrity reveals the choices made by two exceptional women, exceptional by staying true to themselves. Not all decisions were correct, many life changing. Both Laura and Georgie determined what was meaningful in defining them as strong, resilient women. An excellent well written tome worthy of more than a 5 star rating!' NetGalley

'I devoured A Woman of Integrity over the weekend. It's a hard book to put down. […] This is a delicious, hugely enjoyable read and deserves to be a bestseller. If anyone asks me for holiday recommendations, it'll come top of the list. Pacy, full of great characters, with multiple twists and surprises, it's brilliant for the beach or if you need cheering up.' David Belbin, author of the Bone and Cane series 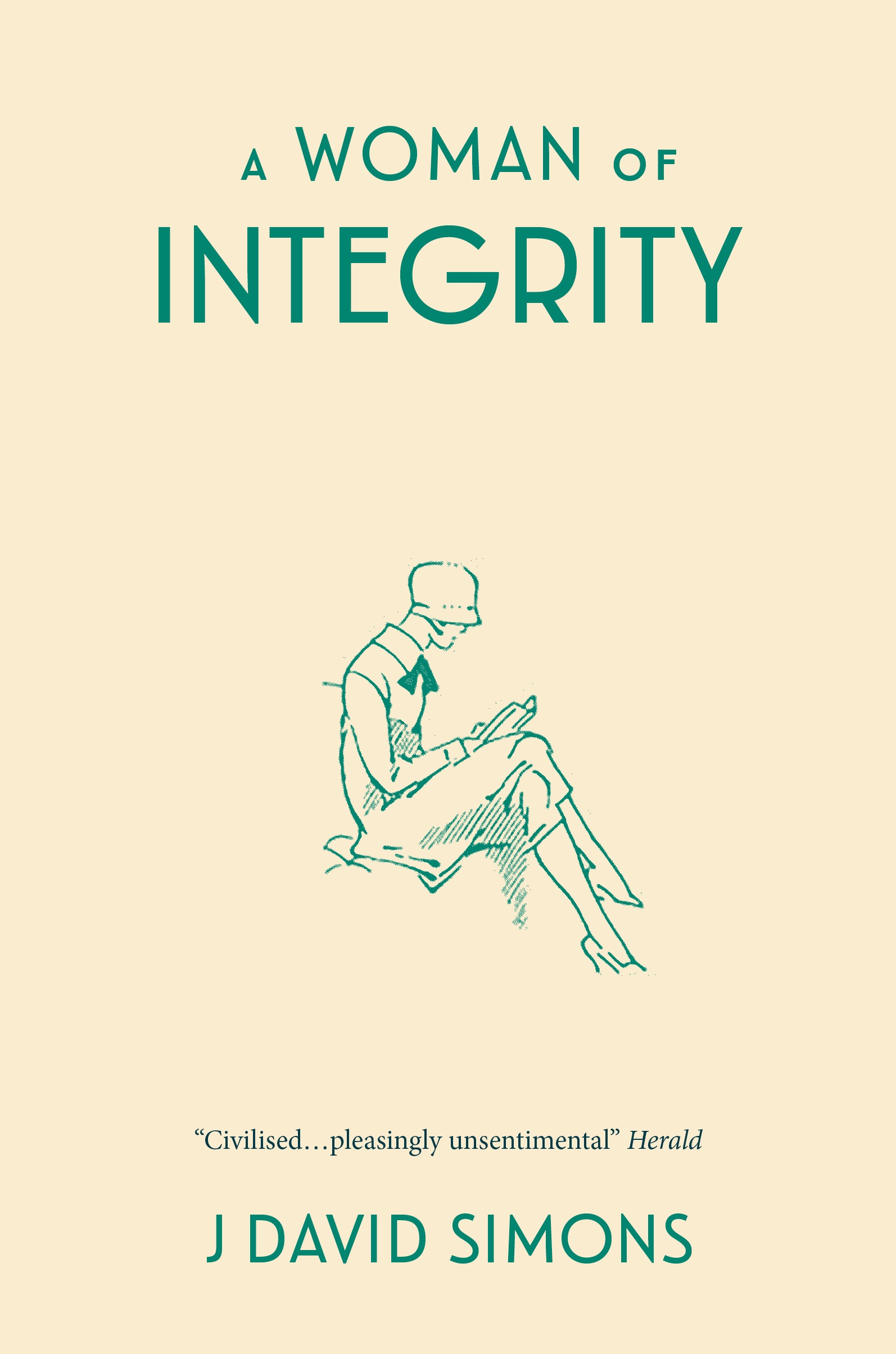 J. David Simons was born in Glasgow in 1953. He studied law at Glasgow University and became a partner at an Edinburgh law firm before giving up his practice in 1978 to live on a kibbutz in Israel. Since then he has lived in Australia, Japan and England, working at various stages along the way as a charity administrator, cotton farmer, language teacher, university lecturer and journalist. He returned to Glasgow in 2006.

Simons’ first novel, The Credit Draper, is set primarily within Glasgow’s Jewish community in the early part of the 20th century and represents the first part of his ‘Glasgow to Galilee’ trilogy. It was shortlisted for the McKitterick Prize. Simons goes on to tackle issues of socialism, feminism and birth control in Glasgow during the 1920s in his second novel in this trilogy, The Liberation of Celia Kahn. The third novel in the trilogy is The Land Agent.

Simons has also written An Exquisite Sense of What is Beautiful, which is set mainly in Japan examines the theme of denial, especially in regard to the dropping of the atomic bombs on Hiroshima and Nagasaki by the United States.

‘In the tradition of Graham Greene or William Boyd, taking in great sweeps of history without ever losing sight of the personal, the telling detail. Accomplished and compelling.’ – Chris Dolan

‘An Exquisite Sense of What is Beautiful is actually several love stories, seamlessly flitting between times, countries and historical events. (I’m sure I won’t be the only one to say this, but) the prose is exquisite and beautiful. And while the main character is neither, you find yourself knowing him, understanding him, caring for him. A great read. A piece of art.’ – Helen Fitzgerald

“Artistic, literary and thoroughly involving… a novelist who understands the craft of writing and who, in this case, has applied it exquisitely.” – Scots Whay Hae! Read more

‘[T]hat rare thing, a genuine tour-de-force, a beautifully written love story that combines political impetus, questions about art and truth, and an exotic setting once almost blown to extinction in an act of war. It is the kind of sophisticated, grown-up writing that properly intrigues, and calls to mind the best of William Boyd and Sebastian Faulks.’ – Lesley McDowell

‘A beautifully sensitive book portraying the inevitably damning inequalities that can arise within all human relationships, be they political, cultural, sexual or emotional. Insightful and thought-provoking.’ – Sara Allerton