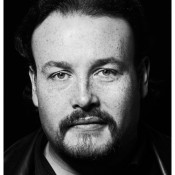 Russel D McLean is an experienced author with seven previous novels to his name, five of them in the popular McNee series, published in several countries. He writes a monthly crime fiction column for the Herald in Scotland and works as a scout identifying emerging crime authors. He spent 10 years as a bookseller in Dundee and Glasgow whilst developing his writing and editing. And When I Die was his first book for Contraband, followed by Ed’s Dead.

And When I Die

Buy And When I Die

Born into one of Glasgow’s most brutal crime syndicates, Kat Scobie has fought long and hard to forge her own path in a world where no choices are given. She thought she’d escaped. She thought she was different.

But as her relatives gather to mourn the death of their most feared son, Kat is drawn inexorably back into their hellish world. And she’s not the only Scobie who resents the family dynamic…

Because Ray Scobie isn’t dead. He’s near-fatally wounded, hell-bent on revenge, and he knows his own father ordered his murder.

Now the only person who can stop the carnage is Kat’s ex-lover John, a cop who’s so deep undercover he’s started to lose himself. With his cover crumbling around him, John’s about to discover that FAMILIES CAN BE MURDER.

REVIEWS OF And When I Die

“Brutal and driven … at its heart is Kat Scobie – complicated and conflicted but achingly real.” Eva Dolan