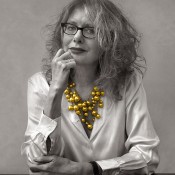 Saskia Goldschmidt worked in theatre and teaching before becoming a full-time writer.

Her first novel, The Hormone Factory, was nominated for the Libris Literature Prize 2013 and the Euregio Prize and has been translated into several languages. It was published in the US by Other Press (2014) and in the UK by Saraband (2016), translated by Hester Velmans. It was broadcast on the Netherlands’ Radio 1 channel and released as a podcast in 2018.

Shocked Earth (2021), translated by Antoinette Fawcett, is the first major novel about the effects of gas extraction on people living in the Dutch province of Groningen.

A riveting thriller about greed, power, hormones, illicit sex, and women … and the monstrous megalomaniac who believes he can have it all. Vainglorious Mordechai de Paauw is ruthless: in the years before World War II, the Dutch pharmaceutical entrepreneur is on the cutting edge of science and determined to develop the contraceptive pill… no matter what the cost. Testing hormonal treatments on his female workers, and sexually exploiting them, Mordechai’s secret immoral life and his successful company are threatened by the rise of Hitler and, years later, a shocking scandal involving his brash son. Will Mordechai ever find redemption, and will the women he manipulates regain control over their own bodies?

REVIEWS OF The Hormone Factory

'The candid tongue of Motke's narration fires up this fast-paced novel, making him a character who won't soon be forgotten.' - The Skinny