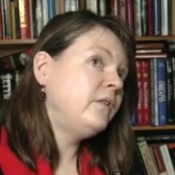 Clare Gibson is a writer and historian specialising in art history and how to interpret symbols, especially in art, antiquities and architectural details. Her previous works include The Hidden Life of Ancient Egypt (2009), The Hidden Life of Renaissance Art (2007), The Hidden Life of Art (2006), Symbols of the Goddess: Universal Signs of the Divine Female (1997, 2005), Sacred Symbols: A Guide to the Timeless Icons of Faith and Worship (1997), and Signs and Symbols: A Guide to their Meaning and Origins (1996), all previously published by Saraband. Educated in Germany and England, she studied modern and medieval history and worked as an editor before focusing on symbolism and her writing career. She is also well known for her Twitter feed as @MrsSymbols and her popular blog, Seeing Symbols.

The Hidden Life of the Ancient Maya

Revelations from a Mysterious World

Buy The Hidden Life of the Ancient Maya

Centuries before European explorers ‘discovered’ the Americas, the ancient Maya flourished in thriving cities like Palenque and Chichen Itza, where they tracked the stars and created elaborate cosmic calendars, built temples to their gods, performed human sacrifices – and drank chocolate. Incoming priests did their best to stamp out the indigenous ways, but the sculptures, cities, murals and even books, highlighted in brilliant Mayan Blue, survived to tell the true story of a vanished civilisation. This lavishly illustrated book goes beyond the apocalyptic 2012 predictions surrounding the end of the Long Count calendar: it delves deep into the mysterious Maya world to uncover the true story of an empire by studying its artefacts. As the players on the cosmic ball court knew, the survivor is the winner.

REVIEWS OF The Hidden Life of the Ancient Maya

'Not just a beautiful but a revelatory book.' - The Scotsman