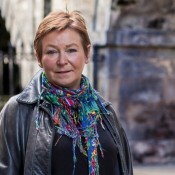 Shelley Day won the prestigious Edge Hill prize for her short story collection What Are You Like? in 2020.

Her debut novel, The Confession of Stella Moon, won the Andrea Badenoch Award, was longlisted for the Bath Novel Award, and shortlisted for the Charles Pick Fellowship and the Dundee International Book Prize.

In 2013 she was named as one of Edinburgh UNESCO City of Literature’s emerging writers. In 2015 she won a Northern Writers’ Award. Before becoming a writer, Shelley worked as a litigation lawyer, a psychology lecturer and a research professor.

The Confession of Stella Moon

Buy The Confession of Stella Moon

1977: A killer is released from prison and returns ‘home’ – to a decaying, deserted boarding house choked with weeds and foreboding.

She is eager to restart her life, but first she must confront the ghosts of her macabre family history and her own shocking crime. Guilt, paranoia and manipulation have woven a tangled web of truth and lies. All is ambiguous. Of only one thing is she certain…

Stella Moon killed her own mother.

REVIEWS OF The Confession of Stella Moon

"A timely and intelligent book ... passion, insight and a real understanding of both risk and mercy ... delicately explores the tangled layers of family grief and guilt." AL Kennedy