Books > Fiction > The Accident on the A35

Buy The Accident on the A35 from

There does not appear to be anything remarkable about the fatal car crash on the A35. But one question dogs Inspector Georges Gorski: where has the victim, an outwardly austere lawyer, been on the night of his death?

The troubled Gorski finds himself drawn into a mystery that takes him behind the respectable veneer of the sleepy French backwater of Saint-Louis.

Graeme Macrae Burnet returns with a literary mystery that will beguile fans of His Bloody Project and The Disappearance of Adèle Bedeau. Darkly humorous, subtle and sophisticated, The Accident on the A35 burrows deep into the psyches of its characters and explores the forgotten corners of small-town life.

REVIEWS OF The Accident on the A35

"Highly accomplished, The Accident on the A35 works on several levels… The narration has the simple momentum of classic crime writing… It has a denouement like something out of Greek tragedy but delivers as a proper police procedural too… Burnet’s cleverness doesn’t get in the way of your enjoyment but playfully adds levels of meaning." Anthony Cummins, Observer

"[A] truly superlative tale… fascinating… one of the most clever and compelling novels to be published this year." Lesley McDowell, Herald

"★★★★ As steeped in the works of Simenon as a good boeuf bourgignon is in red wine. The characters’ pretensions are mercilessly exposed in frill-free prose… What matters, of course, is whether a novel’s characters seem to the reader to be alive. Burnet’s do." Jake Kerridge, Telegraph

"There are so many echoes of French writers in this book… [Raymond] is a fantastic depiction of the typical alienated teenager." Alex Clark, BBC Radio 4 Open Book

"Clever, meandering and oh, so French… Burnet really has — a rare thing nowadays — a novelist’s eye… I confess myself seduced by the atmosphere of provincial ennui. I longed to shrug gallically at a detective through a haze of cigarette smoke, to pour myself a drink from a cut-glass decanter, to drive to the next town to make acrobatic love to a beautiful…I’m getting carried away." James Marriott, Times

"Simenon fans will feel at home in the claustrophobic and petty-minded atmosphere of the French provinces." The Times and Sunday Times Crime Club ‘Picks of the Month’

"Fans of His Bloody Project will [enjoy] familiar themes including questions of authorship, betrayal, family, love, death, truth and lies (or rather, what can be said to be true, if anything, and what is false?), and the possibilities of youth versus the reality of adulthood." Alistair Braidwood, Scots Whay Hae 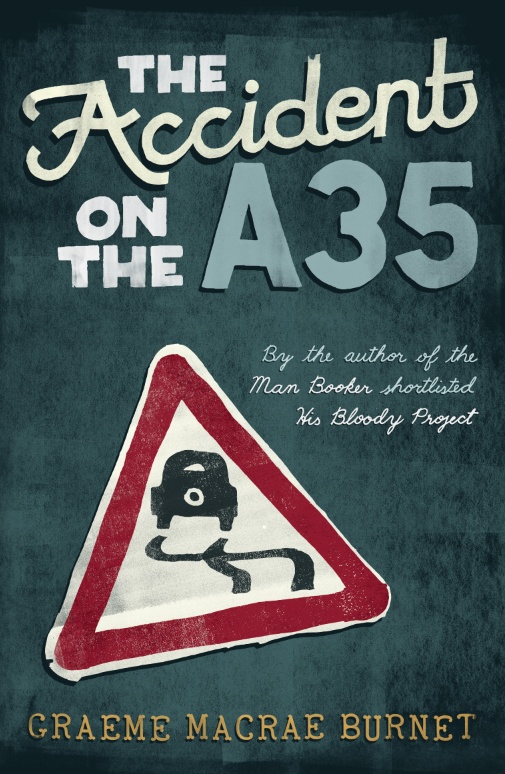 Graeme Macrae Burnet is one of Scotland’s brightest literary talents. Born and brought up in Kilmarnock, he spent some years working as an English teacher in Prague, Bordeaux, Porto and London, before returning to Glasgow and working for eight years for various independent television companies. He has degrees in English Literature and International Security Studies from Glasgow and St Andrews universities respectively.

His second novel, His Bloody Project, concerns a brutal triple murder in a remote Scottish Highland community during the 1860s. Lauded by critics and hugely popular with readers, His Bloody Project won the Saltire Society Fiction Book of the Year Award, and was shortlisted for the Man Booker Prize and the LA Times Book Awards. It has been published around the world.

Graeme’s third novel, The Accident on the A35, was published in October 2017, with the paperback edition out in April 2018.

Praise for His Bloody Project:

“A smart amalgam of legal thriller and literary game that reads as if Umberto Eco has been resurrected in the 19th-century Scottish Highlands.” – Mark Lawson, Guardian

“This is a fiendishly readable tale that richly deserves the wider attention the Booker has brought it.” Justine Jordan, Guardian

“Masterly use of the narrative form.” New York Times

Praise for The Disappearance of Adèle Bedeau:

“A strikingly singular talent, Burnet blends a gripping story with compelling characters and surprising sweeps of the imagination. This is an accomplished, elegantly written and exciting first novel.” Will Mackie, Booktrust

“A deeply atmospheric read. Of all the notable achievements in The Disappearance of Adèle Bedeau the most outstanding is the style of the storytelling. In Graeme Macrae Burnet, we have a refreshing new storyteller, one who presents his morbidly interestingly tales in a most assured and riveting fashion.” Scottish Books