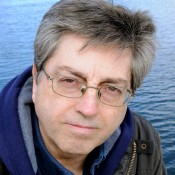 Douglas Skelton, shortlisted for Scottish Crime Book of the Year 2016, is a writer who specialises in the darker side of things: he’s a former journalist who has published eleven true crime books. In 2011 he made the leap to writing crime fiction, beginning with the hugely successful series of Davie McCall thrillers and continuing with the Dominic Queste series: The Dead Don’t Boogie and Tag – You’re Dead. His latest thriller, The Janus Run, is NYC noir at its finest.

Maverick investigator Dominic Queste is on the trail of missing butcher Sam Price. But he soon uncovers links to a killer with a taste for games.

What began as a simple favour for his girlfriend quickly descends into a battle for survival against an enemy who has no qualms about turning victims into prime cuts. Amidst a twisted game of cat and mouse, suspicious coppers, vicious crooks and a seemingly random burglary, Queste has to keep his wits about him.

Or he might just find himself on the butcher’s block.

“A thoroughly gripping whodunit that shows just how darkly humorous Tartan Noir can become: and how genuinely chilling it can be at the same time.” Undiscovered Scotland