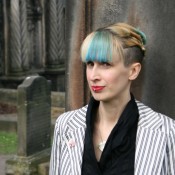 Ever Dundas gained a Creative Writing Masters with Distinction from Edinburgh Napier University in 2011, and she has a First Class Degree in Psychology and Sociology from Queen Margaret University. She has had several short stories and dark fairy tales published and her work has been shortlisted for awards. Goblin is her debut novel, and she is currently working on her second.

She is an oddball and an outcast. But she’s also a dreamer, a bewitching raconteur, a tomboy adventurer whose spirit can never be crushed.

Running feral in World War II London, Goblin witnesses the carnage of the Blitz and sees things that can never be unseen…but can be suppressed. She finds comfort in her beloved animal companions and lives on her wits with friends real and imagined, exploring her own fantastical world of Lizard Kings and Martians and joining the circus.

Caught between creativity and chimera

In 2011, London is burning once again, and an elderly Goblin reluctantly returns to the city. Amidst the chaos of the riots, she must dig up the events of her childhood in search of a harrowing truth. But where lies truth after a lifetime of finding solace in an extraordinary imagination, where the distinction between illusion and reality has possibly been lost forever?

A true original, with an unforgettable story to tell

Saltire Society First Book of the Year 2017, WINNER
The Guardian Not the Booker prize 2018, LONGLISTED

“Terrific … moving. It is a celebration of freakery … a meditation on trauma and loss and abandonment … which, somehow, is never bleak. Goblin brims throughout with a kind of reckless joy.” Peter Ross, Guardian

"A standout debut…sophisticated." Nick Barley, Herald, Books of the Year 2017

"The best debut fiction by a Scottish author since 2012... A profoundly affecting, intellectually challenging and beautifully written fable ... a marvellous piece of work."  Stuart Kelly, Scotsman

"Enthralling... a captivating debut... Dundas presents us with an iconic protagonist: a powerful imaginative force who looks beyond the façade of 20th Century Britain and sees a fairy tale of lizard kings and dolls with shrews’ heads." Alastair Mabbott, Herald

"A captivating and capricious debut that explores with a deft hand the ‘creature world’ we all carry somewhere inside." Mary Paulson Ellis