It was wonderful to celebrate the launch of Sue Lawrence’s latest historical page-turner, The Green Lady, at Waterstones Edinburgh West End with a full, in-person, appreciative crowd! Alongside Sue was literary agent and event chair extraordinnaire Jenny Brown, asking some fascinating questions. 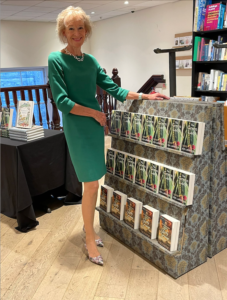 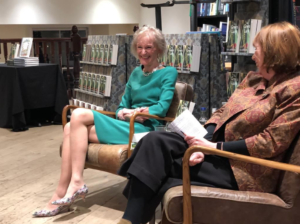 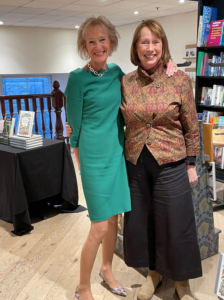 The evening included a discussion around the inspiration for The Green Lady and Sue’s interest in the experience of women in Scotland’s past. Sue also descried how she researched the lesser-known byways of history for her characters and authentic period details. She chatted to guests individually during the book signing. She had brought along some delicious period treats she had baked for the occasion. Her home-made Holyrood Tartlets, Cheese Shortbread, and Cheese and Basil Puffs look as good as they tasted! 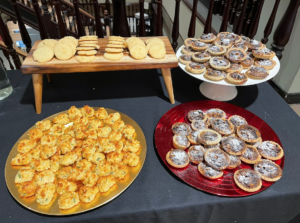 You can read a full write up of the event by Joanne Baird on her Portobello Book Blog, here.

1567, Scotland: no place for a woman. Mary, Queen of Scots, is forced to abdicate in favour of her infant son. She can rely only on the loyalty of her ladies-in-waiting, chiefly Marie Seton. Meanwhile, the political turmoil in the country is mirrored behind the walls of beautiful Fyvie Castle. Lilias’s marriage to Marie’s nephew, the ruthlessly ambitious Alexander Seton, goes awry after the birth of yet another daughter. He blames her, and contemplates drastic action. To what lengths will a man go to secure a son and heir?

The Green Lady is a shocking tale of intrigue, secrets, treachery and murder. Based on true events, but seen from a different perspective than is found in most history books. Casting a fascinating light on the ruthless nature of power, the story highlights the precarious position of sixteenth-century women. Even those in the most privileged of circumstances.

Sue Lawrence is the author of absorbing, popular historical thrillers that cast fascinating light on the perils and injustice that characterised women’s lives in Scotland through centuries past – whether born into penniless or powerful families, including The Green Lady, The Unreliable Death of Lady Grange and Down to the Sea. She is also one of the UK’s leading cookery writers and broadcasters: former Cookery Editor of the Sunday Times and a regular contributor to leading magazines, appearing frequently on BBC Radio 4’s Kitchen Cabinet. Born in Dundee, she was raised in Edinburgh, where she now lives.