Last week we were at Waterstones Edinburgh West End for the launch of One Body, the latest memoir by Catherine Simpson.

Chaired by Mary Paulson-Ellis, on Thursday evening we celebrated with Catherine in an evening of fun. Kindly hosted by Waterstones Edinburgh West End, the launch included a Q&A, a reading by Catherine and a chance to have your copy of One Body signed. 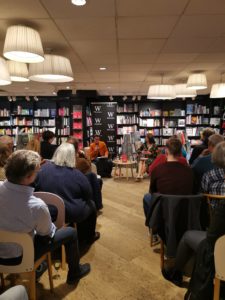 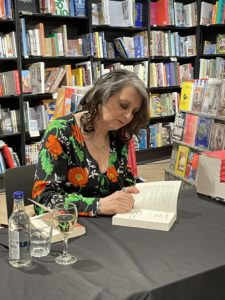 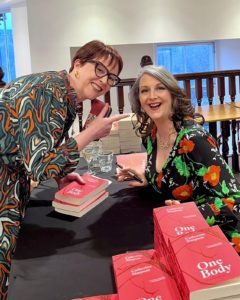 In One Body, after her diagnosis Catherine discusses the support she has from her family, husband, Cello, and daughters, Nina and Lara. It was great to see some of our Saraband family at the event too, including Case Study author Graeme Macrae Burnet. 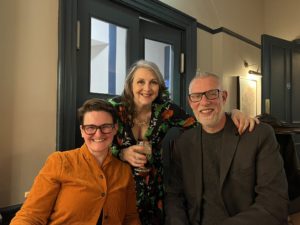 By the time she reached her fifties, Catherine Simpson and her body had gone through a lot together – from period pain, an abortion and early menopause to shaming and harassment. But there had been success, joy, love and laughter too: far more freedoms than her mother had, a fulfilling family life and career, and the promise of more gains for her daughters.

So when a cancer diagnosis upends her life, Catherine is forced to reflect on her body, then and now. From having been brought up on a farm where vets were more common than doctors, and where illness was ‘a nuisance’, she finds herself faced with the nuisance of a lifetime.

One Body is the candid, searing and often darkly funny story of how Catherine navigates her treatment and takes stock of the emotions and reflections it provokes, until her cancer is in remission. And how she comes to appreciate the skin she is in – to be grateful for her body and all that it does and is.

Catherine Simpson is a novelist, journalist, poet and short story writer based in Edinburgh. Her memoir When I Had a Little Sister was published by 4th Estate in February 2019 to great acclaim, and her debut novel Truestory was published in 2015. In 2013 she received a Scottish Book Trust New Writers Award. Her work has been published in various anthologies and magazines, published online and broadcast on BBC Radio. Born on a Lancashire dairy farm, she is now based in Edinburgh.

Were you at the One Body launch?

If you were in attendance on the night, please tag us in your photos of the event on social media (@sarabandbooks)!