Case Study author Graeme Macrae Burnet was a guest on last week’s episode of The Big Scottish Book Club. Talking to Damian Barr, Graeme was joined by Denise Mina and Stuart Cosgrove to discuss their books. 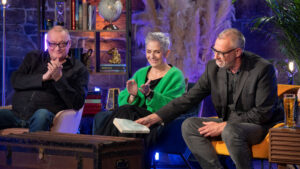 You can catch up on the episode on BBC iPlayer here.

“A page-turning blast, funny, sinister and perfectly plotted … Rarely has being constantly wrong-footed been so much fun.” James Walton, The Times

‘I have decided to write down everything that happens, because I feel, I suppose, I may be putting myself in danger.’