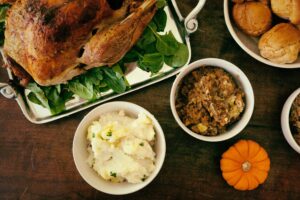 If you are from a family with Scottish roots, have guests from Scotland during your Thanksgiving celebrations, or simply enjoy all things Highland, Clans and Tartans, why not try this mouth-watering recipe for your Thanksgiving leftovers.

In The Green Lady, there are descriptions of luxurious dishes served to Mary, Queen of Scots, and members of her Court. These would have been enjoyed by aristocratic families throughout Scotland. Spiced venison pie, capons with rosemary, and partridge pie with ginger are dishes that feature in the book, as does pheasant pottage with prunes.

Pheasant is used often in Scottish recipes, but this crumble can be made either with leftover pheasant or turkey, so here’s a good way to use up leftover Thanksgiving turkey.

Though most crumbles are sweet, this is a delicious savoury crumble that should be served with some good bread and a salad. 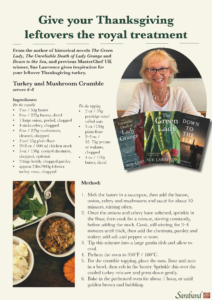 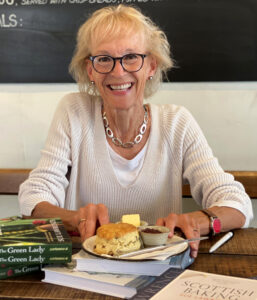 Sue Lawrence is the author of absorbing, popular historical thrillers that cast fascinating light on the perils and injustice that characterised women’s lives in Scotland through centuries past – whether born into penniless or powerful families: The Unreliable Death of Lady Grange, Down to the Sea, The Night He Left and Fields of Blue Flaxand most recently The Green Lady.

She is also one of the UK’s leading cookery writers and broadcasters. Having trained as a journalist, she won BBC’s MasterChef in 1991 and became a food writer, Cookery Editor of the Sunday Times and a regular contributor to Scotland on Sunday and many leading magazines, and she appears frequently on BBC Radio 4’s Kitchen Cabinet. Born in Dundee, she was raised in Edinburgh, where she now lives. She has won two Guild of Food Writers Awards and a Glenfiddich Food and Drink Award and is the author of more than 20 books.

1567, Scotland: no place for a woman.Mary, Queen of Scots, is forced to abdicate in favour of her infant son. She can rely only on the loyalty of her ladies-in-waiting, chiefly Marie Seton. Meanwhile the political turmoil in the country is mirrored behind the walls of beautiful Fyvie Castle. Lilias’s marriage to Marie’s nephew, the ruthlessly ambitious Alexander Seton, goes awry after the birth of yet another daughter. He blames her, and contemplates drastic action. To what lengths will a man go to secure a son and heir?
The Green Lady is a shocking tale of intrigue, secrets, treachery and murder, based on true events, but seen from a different perspective than is found in most history books. Casting a fascinating light on the ruthless nature of power, the story highlights the precarious position of sixteenth-century women, even those in the most privileged of circumstances.

The Unreliable Death of Lady Grange

Edinburgh, January 1732: It is Lady Grange’s funeral. Her death is a shock: still young, she’d shown no signs of ill health. But Rachel is, in fact, alive and (mostly) well. She’s been brutally kidnapped by the man who has falsified her death – her husband of 25 years, a pillar of society with whom she has raised a family. Her punishment, perhaps, for railing against his infidelity – or for uncovering evidence of his treasonable plottings against the government. Whether to conceal his Jacobite leanings, or simply to ‘replace’ a wife with a long-time mistress, Lord Grange banishes Rachel to the remote Hebridean Monach Isles, from where she’s removed again to distant St Kilda, far into the Atlantic – to an isolated life of primitive conditions, with no shared language – somewhere she can never be found.

This is the incredible and gripping story of a woman who has until now been remembered mostly by her husband’s unflattering account. Sue Lawrence reconstructs a remarkable tale of how the real Lady Grange may have coped with such a dramatic fate, with courage and grace.

Down to the Sea 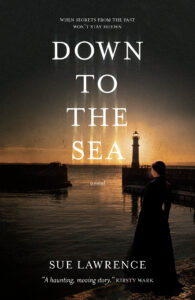 When Rona and Craig buy a large Victorian house up from Edinburgh’s Newhaven district – once teeming with fishing boats – they plan to renovate and set it up as a luxury care home. But something is not quite right: disturbing sounds can be heard when the sea mists swirl; their unpredictable neighbour makes it clear that the house was not always a happy family home. And their ‘characterful’ historic pile has a gloomy cellar harbouring relics from days gone by.

Back in the 1890s, superstitious fishwives blame young Jessie for the deaths of their menfolk in a terrible storm, and she’s forced into the Newhaven Poorhouse. In those less enlightened times, life was often severe, cruel even, and Jessie is entirely at the mercy of a tyrant matron. But one inmate is not all she seems. Jessie begins to pick at the truth, uncovering the secrets and lies that pervade the poorhouse – and which will have profound and dangerous consequences in the future.