Graeme Macrae Burnet has been longlisted for the Booker Prize for his novel Case Study. This is the second time the Glasgow-based author has been nominated for the prize; he was shortlisted in 2016 for His Bloody Project. 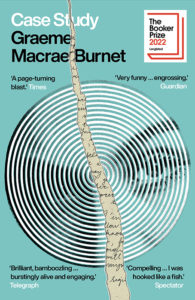 Set in London in 1965, Case Study is the story of an unworldly young woman who believes that a charismatic psychotherapist, Collins Braithwaite, has driven her sister to suicide. Intent on discovering the truth, she assumes a false identity and presents herself to him as a client, recording her experiences in a series of notebooks. But she soon finds herself drawn into a world in which she can no longer be certain of anything.

In Case Study, Graeme Macrae Burnet presents these notebooks interspersed with the biography of Collins Braithwaite. The result is a dazzling, page-turning and wickedly humorous meditation on the nature of sanity, identity and truth itself, by one of the most inventive novelists writing today.

Case Study was published in October 2021 by independent publisher Saraband to universal critical acclaim. The Spectator called it ‘compelling… I was hooked like a fish’, The Times called it ‘A page-turning blast, funny, sinister and perfectly plotted so as to reveal ― or withhold ― its secrets in a consistently satisfying way.’ The Irish Times described it as ‘compulsive reading’ and the Telegraph as ‘indecently entertaining’ in their Books of the Year roundup. Case Study has been longlisted for the Gordon Burn prize and shortlisted for an Australian Ned Kelly award. It was the Bookseller’s Association’s Fiction Book of the Month in October 2021.

Graeme Macrae Burnet says “I could not be more thrilled that Case Study has made it to the Booker longlist. For your work to be deemed worthy of being in the running for such a prize is incredibly gratifying. And all the more so to do it in partnership with the brilliant Saraband Books.”

Saraband Publisher Sara Hunt says “I am absolutely delighted to see Case Study amongst the ‘Booker Dozen’. Graeme has an uncommon skill for packing literary excellence and intelligent, surprising subject matter inside a true page-turner. Case Study is a fantastic novel – playful, clever, stylish and witty, with emotional depth, and utterly captivating. I am so thrilled the judges have selected it for this prestigious longlist, and of course very happy for Graeme.”

Graeme’s agent Isobel Dixon of Blake Friedmann says ‘Graeme Macrae Burnet’s dazzling and deviously clever Case Study has delighted so many readers around the world already and it’s a real joy to see the Booker judges nominate it for this year’s longlist. I’m so thrilled for Graeme and for Saraband, who have published with such passion, and excited that the prize will help introduce Graeme’s brilliant work to an even wider readership.’