Some #FathersDay recommendations from our online shop. We’ve got some stereotypical Dad Books along with some less stereotypical suggestions. Something for everyone. 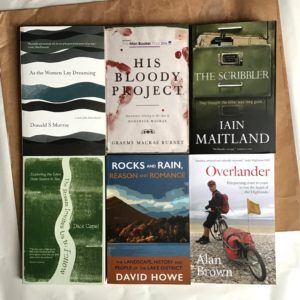 A series of introspective ramblings from the source of the river in Mallerstang to the Solway Firth at Carlisle. As a long-time countryside manager for the Eden Valley, few people know this area quite as intimately as Dick Capel. Covering natural history, myth and legend, this is an unrivalled companion to an unspoiled gem of the English countryside.

David Howe tells the story of the Lake District, England’s most dramatic landscape. Home to vistas of stunning beauty and a rich heritage, it is an area of England that fascinates and inspires. He reveals how half a billion years of shifting ice, violent volcanoes and (of course) falling rain have shaped the lakes and fells that have fired the imaginations of the great sons and daughters of the area.

Seeking a temporary escape from city life and a mad modern world, Alan Brown plots out a personal challenge: an epic coast-to-coast trip through the wild and lonely interior of the Highlands. Alan traces a route from Argyllshire’s Loch Etive across remote Rannoch Moor, the beautiful glens of Perthshire and dramatic Grampian terrain to reach the Moray Firth at Findhorn. Ready for all weathers and obstacles, he succumbs to the hypnotic daily routine of ride, eat, sleep, repeat.

A novel of the Iolaire disaster. Tormod Morrison was there that terrible night. He was on board HMY Iolaire when it smashed into rocks and sank, killing some 200 servicemen on the very last leg of their long journey home from war. A deeply moving novel about passion constrained, coping with loss and a changing world, and how a single event can so dramatically impact communities, individuals and, indeed, our very souls.

A mesmerising literary thriller following a brutal triple murder in a remote community in the Scottish Highlands. A memoir written by the accused makes it clear that he is guilty, but it falls to the country’s finest legal and psychiatric minds to uncover what drove him to commit such merciless acts of violence.

DI Gayther and his rookie colleague DC Carrie have been assigned a new caseload. Or rather, an old one… cold murder cases of LGBTQ+ victims. Georgia Carrie wasn’t even born when the notorious serial killer began his reign of terror, but Roger Gayther was on the force that failed to catch him and remembers every chilling detail.