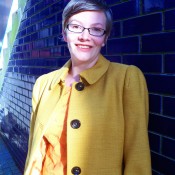 Jane Alexander’s short stories and creative non-fiction have been widely published in a number of anthologies and literary magazines, including Mslexia, Litro and The Orphan Leaf Review. A winner of two major national story competitions, and the recipient of a Scottish Arts Council New Writers bursary, Jane is also a lecturer in creative writing at the Open University.

At the age of thirty, Campbell Johnstone is a failure. He’s stuck behind the bar of a shabby pub, watching from the sidelines while everyone else makes a success of their lives. The most visible is Eve Sadler, a childhood friend and rising Hollywood star. When Campbell tries to rekindle their relationship, he longs for the glitter of her success to rub off on him  but a single shocking night changes everything, in ways he could never have predicted. When the dust settles, Cam’s life is transformed. The recognition he’d given up on is within reach  but at what cost?

The Last Treasure Hunt explores our obsession with fame and celebrity with great intelligence and sly wit  it’s a modern media morality tale with bite.

REVIEWS OF The Last Treasure Hunt

'The Last Treasure Hunt quickly asserts itself as something unique...a masterclass on what happens when empathy is absent. [Jane Alexander's] debut novel marks the arrival of an important new voice.' - Gutter

'A fascinating character, as complex and exasperating as a real person. As he mires himself ever further into controversy, its as gripping as a real treasure hunt. He'll stay with you long after the last clue is solved.' - Mandy Haggith