Last week marked the official launch of Cold Fish Soup, by Adam Farrer. The event was hosted by our friends at Blackwell’s in Manchester and was chaired by Adam’s friend and mentor, Jenn Ashworth – herself a widely published author and Professor of Writing at Lancaster University. 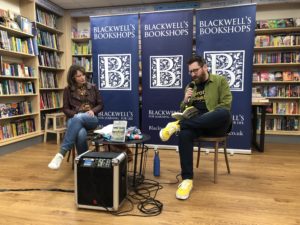 About the Cold Fish Soup launch

Joined by an enthusiastic crowd which included Adam’s friends and family, the event was a total success. Anyone who knows Adam knows how funny and quick-witted he is, but he also allowed himself to be completely vulnerable and opened up to the audience about some of the darker topics discussed in his book.

Adam read passages from two of his essays, including anecdotes about his teenage quest to become Steven Tyler, and a fond remembrance of his late brother, Robert. The extracts he chose perfectly encapsulate the essence and range of the book, with the first making the entire audience laugh out loud and the second leaving Adam emotional and the crowd thoughtful as he paid tribute to Robert.

After Jenn had finished interviewing Adam, she opened the evening to questions from the audience. There were plenty of raised hands. During the Q&A Adam revealed aspects of his writing process and how it felt to write about his family.

When Wendy, a former colleague of Adam’s from a magazine they had both worked for in the late ’90s, asked a question, Adam answered – and was reminded of a pivotal moment for him. She asked when he first realised he was a writer, to which he replied that it was in fact Wendy herself who had given him the confidence to pursue writing as a career, when she had praised his work.

Another audience member described Adam as a ‘literary rock star’ – which certainly felt apt after the event, when the book signing queue ran the length of the entire shop floor. 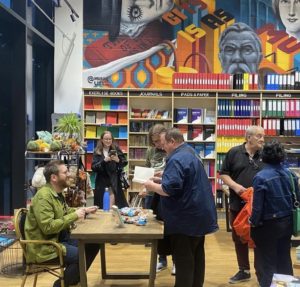 We had the best time celebrating Cold Fish Soup with Adam and everyone who attended. We can’t thank the team at Blackwell’s and Jenn Ashworth enough for making the evening so brilliant, and of course Adam himself, for being on top form! 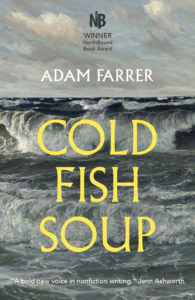 WINNER OF THE 2021 NORTHBOUND BOOK AWARD

“Witty and introspective … moving … vivid evocations of the landscape … Echoing the canny writing of David Sedaris, Farrer has a knack for wringing hilarity from life’s grim moments … this meditation on the beauty of impermanence charms.” Publishers Weekly

Before Adam Farrer’s family relocated to Withernsea in 1992, he’d never heard of the Holderness coast. The move represented one thing to Adam: a chance to leave the insecurities of early adolescence behind. And he could do that anywhere. What he didn’t know was how much he’d grow to love the quirks and people of this faded Yorkshire resort, in spite of its dilapidated attractions and retreating clifftops.

While Adam documents the minutiae of small-town life, he lays bare experiences that are universal. His insights on family, friendship, male mental health and suicide are revealed in stories of reinvention, rapacious seagulls, interdimensional werewolves, burlesque dancing pensioners, and his compulsion towards the sea.

Cold Fish Soup is an affectionate look at a place and its inhabitants, and the ways in which they can shape and influence someone, especially of an impressionable age. Adam’s account explores what it means to love and be shaped by a place that is under threat, and the hope – and hilarity – that can be found in community. 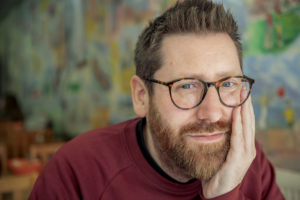 Adam Farrer is a writer and editor who has per­formed at festivals and events including Manchester Literature Festival and the Northern Lights Writers Conference. His work has been published in the anthology Test Signal and he edits the creative non-fiction journal The Real Story, as well as teaching writing workshops. Cold Fish Soup is his first book.