Francis Sanzaro PhD is a climber, academic, speaker, and the author of books on philosophy, climbing, athletic theory and comparative religion. His essays, poetry and fiction have appeared in The New York Times, Outside, Huffington Post, Climbing, Adventure Journal, The Baltimore Post Examiner, Continental Philosophy Review, and Vol. 1 Brooklyn, Rock and Ice, among a dozen others. His books include The Boulder: A Philosophy for Bouldering; and Society Elsewhere: Why the Gravest Threat to Humanity Will Come From Within. He appeared at TEDx Ascend in Colorado speaking on approaches to risk and our relationship with the natural world. 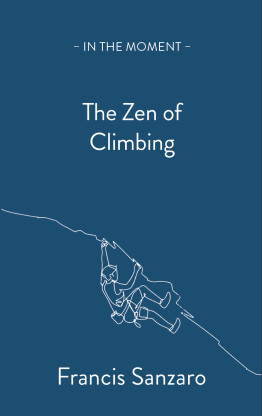 The Zen of Climbing