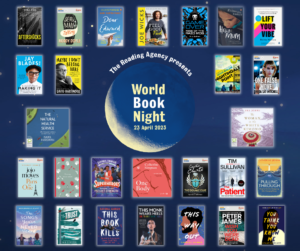 World Book Night, celebrated on April 23 and now in its thirteenth year, is an initiative to encourage more adults to read, by facilitating a giveaway of thousands of books through partner organisations such as libraries and charities to people who may need extra help to access books and reading. Since 2013, World Book Night has been a part of The Reading Agency, and is currently supported by Arts Council England.

One Body, which was also shortlisted for Non-Fiction Book of the Year at Scotland’s National Book Awards 2022, documents Catherine’s life journey within her body through experiences ranging from severe period pain and childbirth to early menopause. Alongside her career and family life, she’s dealt with misogyny and body-shaming, but also dieted, jogged, tanned, and plucked—attempting to conform to prevailing standards of “acceptable womanhood.”

But when Catherine received a cancer diagnosis following a routine mammogram, she could no longer pummel her body into submission and was forced to take stock. From growing up on a farm where vets were more common than doctors, and where illness was “a nuisance,” she now faced the nuisance of a lifetime.

One Body – demystifying, often hilarious, and sometimes shocking – is the candid and hugely relatable story of how Catherine navigated her treatment and the emotions and reflections it provoked on episodes from her past. And how she came to drop the unattainable standards imposed on her body, until she could simply appreciate the skin she is in. The audiobook is narrated by Catherine herself and has drawn praise for its warmth, humour and directness.

The audiobook was recorded at Offbeat Studios in Edinburgh, where it was produced by Iain McKinna and Steve Worsley. 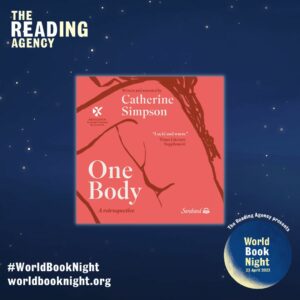 Catherine Simpson is an award-winning novelist, journalist, poet and short story writer. Her memoir When I Had a Little Sister was published by 4th Estate in February 2019 to great acclaim, and her debut novel Truestory was published in 2015. In 2013 she received a Scottish Book Trust New Writers Award. Her work has been published in various anthologies and magazines, online and on BBC Radio. Born on a Lancashire dairy farm, she has been based in Edinburgh for more than twenty years.

Catherine Simpson says “It is a huge privilege to be involved in World Book Night. Books have brought such joy into my own life, so it is the greatest honour to be able to share my book with new readers in this way. My memoir One Body touches on themes of isolation, fear and loneliness and I hope it reaches people who feel comforted and less alone after reading it. How wonderful if my words and hard-won experiences can help lighten the load for others through this amazing festival of reading.”

Sara Hunt, MD of Saraband, says “World Book Night goes from strength to strength, reaching new readers each year and making the magic and power of books available for people who don’t always have access to reading, for whatever reason. We are really delighted to get involved this year and to know that Catherine’s brilliant, funny, no-nonsense, life-affirming audiobook will be heard by the listeners it could matter to the most.”

Find out how your organisation can sign up to give away copies as part of the celebrations for World Book Night 2023 here.