His Bloody Project – Spiracle audiobook of the month

We are delighted that the Spiracle publisher has selected the brilliant, Booker-prize-shortlisted His Bloody Project by Graeme Macrae Burnet, read by Crawford Logan, as their featured October title.

Spiracle is the new independent audiobook platform for book lovers. Think of Spiracle as the friend who pulls out a book and says, “No, really. I know you’ll love this.” 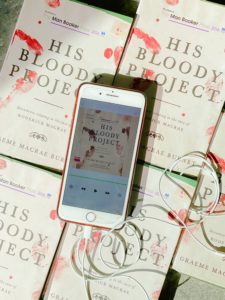 Like all powerful novels, His Bloody Project entwines the detail of individual lives with its depiction of wider forces and structures – political, social and economic. But in this novel the relation between these two is part of what is made visible – it is the question the novel asks. What led to those three murders – Roddy’s thwarted desire, his grief, his pathology, or a whole system designed to benefit the very few and impoverish the many? And if novels have usually paid more attention to the former – to individual lives – why are they believable, why are they important, given that, as Roddy’s dour and damaged father says, ‘One man can no more see into the mind of another than he can see inside a stone’?

Subscription to Spiracle includes two selected audiobooks each month to own for life, plus invitations to special events and recordings. October’s selections are Graeme Macrae Burnet’s His Bloody Project, and Shalimar by Davina Quinlivan (with Little Toller Books). Subscription is £12 per month or £120 per year.

“Rich, atmospheric … unsettling and impossible to put down.” The Times
“A smart amalgam of legal thriller and literary game that reads as if Umberto Eco has been resurrected in the 19th-century Scottish Highlands.” The Guardian

“Graeme Macrae Burnet makes such masterly use of the narrative form that the horrifying tale he tells… seems plucked straight out of Scotland’s sanguinary historical archives.” New York Times