I was always aware of breast cancer; I just didn’t believe it would happen to me – not at the age of 54 anyway.

Prior to my cancer diagnosis I prided myself on my practical, non-hysterical, level-headed approach to the idea of death. I thought I was cool with it – but this proved to be far from the truth. The shock and terror were total. The words ‘I have cancer’ reverberated round and round my head. ‘I have cancer…I have cancer…’ Unbelievable!

Why did I think I was special, and it wouldn’t happen to me?

After all, one in two of us will at some point be treated for cancer, many members of my own family have lived with and died of cancer and yet I was struck with disbelief. 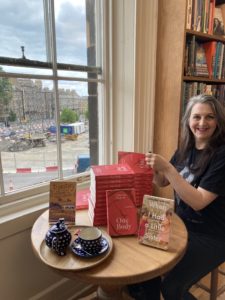 My breast cancer was discovered during a routine mammogram – a screening programme offered to all women in Scotland over the age of 50 – a mammogram that I very nearly did not attend. My mother had told me horror stories of her mammogram going wrong, of the machine making a banging noise, of the nurse panicking. I have been assured by medics over the years that this cannot be correct, but my mother believed she had been damaged by a mammogram right up until she died of Non-Hodgkin’s Lymphoma a few years later. Her stories terrified me, and I vowed I would never put myself through such a thing.

Then a friend was diagnosed with breast cancer during her routine screening, and I knew I must go.

When my ‘unclear’ results came back there followed a shocking and bewildering array of scans and biopsies and the hideous waiting for final results – until I received the news that although there was no lump and no pain and it would not have been detectable without the mammogram, I did indeed have cancer.

I always turn to books in times of crisis so I searched for the right book to get me through, but I could not find it – so I wrote it.

One Body: A Retrospective was written as the cancer experience unfolded because I wanted it to be a raw, honest, un-sugared account. I wrote on the day I underwent surgery; I wrote during the weeks of radiotherapy and when I began hormone therapy – all the while experiencing an existential dread. 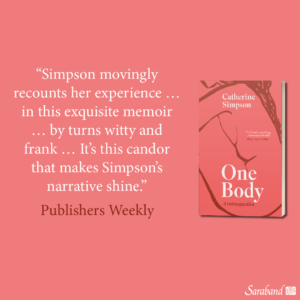 Going through these extreme experiences made me reassess all that my body had gone through over the years from puberty to pregnancy, from sexual assault to menopause, plus all the endless dieting, tanning, plucking, and exercising I had put it through in a quest to be the ‘right kind’ of woman. Some of the realisations were funny, some sad, others were grotesque and outrageous, but I wrote about them all and realised it was time to give myself a break and be grateful for this one body of mine.

Cancer was lonely and frightening – despite having loving family and friends – but it was made bearable by being able to drop into Maggie’s to spend time with other people affected by cancer, and for that I will always be grateful.

Cancer put a huge dent in my sense of self – I was someone who got cancer aged 54, I was not cool with the idea of death, I no longer thought I could live to be a hundred just by deciding.

But as I wrote in the book:

Cancer made me slow down and be grateful.

Cancer made me speed up and get things done.

Cancer made me live intensely in this one body of mine.

This Breast Cancer Awareness Month we are donating proceeds from the sale of One Body on our website to Maggie’s, a charity which supports cancer patients and their families. Find out more here.