New evidence has come to light in a sensational twist in the notorious case of Roderick Macrae, sources claim. In the first major development to this case since 1869, seasoned senior reporter John Murdoch reveals his remarkable scoop on the front page of this week’s Culduie Courier. 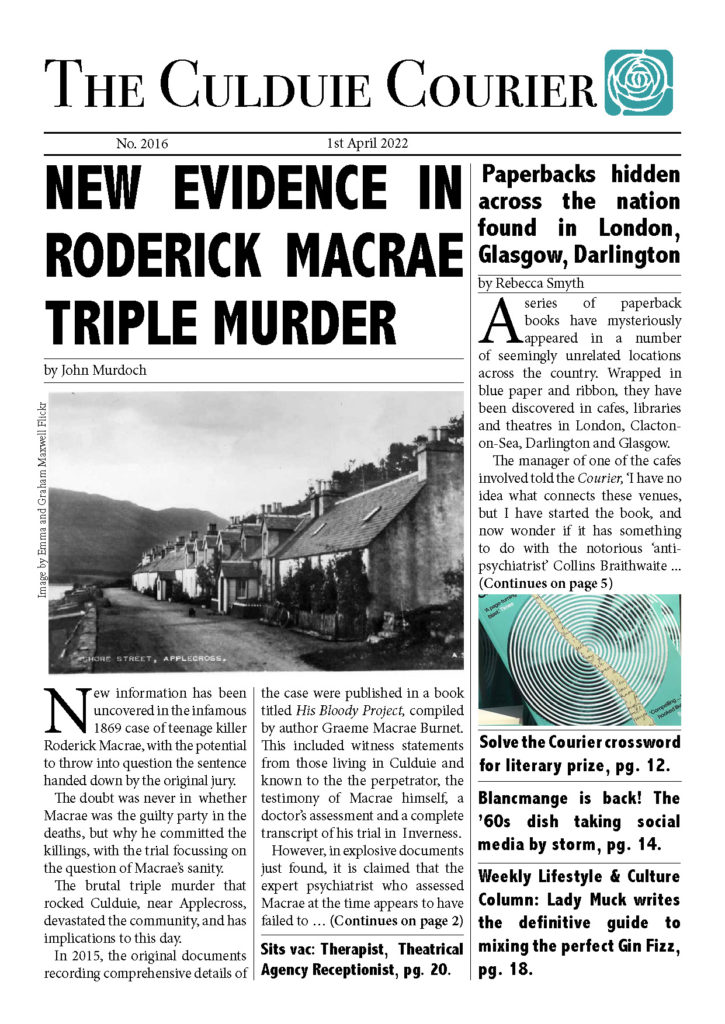 During the trial, the judge admitted evidence from expert James Bruce Thomson, who was then Resident Surgeon at the General Prison for Scotland in Perth. As such, Thomson was one of the first authorities in the emerging discipline of Criminal Anthropology. Dr Thomson had examined suspect Roderick Macrae while he was detained awaiting trial, with a view to ascertaining Macrae’s state of mind and fitness to stand trial.  The new evidence relates to this aspect of the proceedings, according to Murdoch’s source. At the time, a perpetrator’s state of mind was not routinely considered during the judicial process. Character witnesses were given greater weight, alongside other forms of evidence. This is why the Macrae case has long been regarded as a significant Case Study.

Nothing to see here, says author

The killings in Culduie and the susbsequent Macrae trial were documented in detail in 2015 by Glasgow author Graeme Macrae Burnet, who began researching the case after discovering some contemporary newspaper accounts during the course of researching his Applecross family history at the Inverness Highland Archive Centre in 2014. Asked about whether new evidence might tell us more accurately whether the perpetrator was sane or insane, and whether he could have received a fair trial, Burnet said: “After exhaustive research, everything I discovered about the case is in the book, and I don’t believe this new development constitutes new material evidence. Beyond that, I have no further comment and would simply ask people to refer to the original documents.”

We’ll be paying close attention to this story as it unfolds.