Mothers and Daughters is written by One Body author Catherine Simpson. She reflects on her relationships with her mother and her daughters, in the lead-up to Mother’s Day.

I think of my mother every day, sometimes many times a day, even though she died seventeen years ago.

It’s hard to believe seventeen years have passed since I heard her voice, listened to her dry opinions, ate her delicious food or watched her dry her hands on her pinny. Yet part of me would not be surprised if she walked through the door this minute, because as a memoir writer I spend a lot of time with my mother.

Mothers are big in memoir. They often take centre stage, for better or for worse. I have whole writing exercises devoted to mothers in my memoir-writing course because, when it comes to our childhood, memories of our mothers are often our first, our last and our everything. 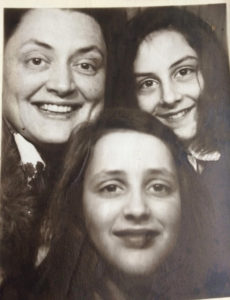 Me, Mum and my sister Tricia

She features, of course, in my memoir One Body, which is a retrospective on growing up and growing older in my body. In fact fittingly, my mother is on the first page – giving birth to me in the sitting room while my dad milks the cows outside. Also fittingly, she is quoted as saying: ‘I didn’t make such a good job of you,’ because I turned out to be something of the runt of the litter, and my mother was not one to mince her words.

Indeed, she makes several appearances in the opening chapter – feeding me ‘liquidised sandwiches’ when I refused milk as a baby, keeping me alive in front of the kitchen range when I got whooping cough, and barking at me to ‘Talk properly!’ when as a schoolgirl I decided to adopt a stutter.

My mother was a heroic homemaker, a domestic goddess, intelligent, beautiful, cultured and talented. She was also intimidating, obstinate, fiery-tempered and difficult.

I wouldn’t have dared to write about her when she was alive, but seventeen years ago when she died I was in the middle of raising my own two daughters, and life as a novelist and memoir-writer was just a dream.

What would she think? I like to imagine she would be proud – she certainly liked to tell relatives about her children’s achievements. But who knows, because I don’t sugar-coat or sentimentalise my mother in my writing.  She was a strong, unique woman, but she was not an easy mother to have.

However, one of the many things my mother did give me during her life was lots of material for a memoir, and for that I am truly thankful.

Recently my 26-year-old daughter, Nina, began writing personal blogs in which I make the odd appearance. It is rather dizzying to be the ‘written about’ rather than the writer, but after all, what can I say? Both Nina and my younger daughter, 23-year-old Lara, have always been gracious about appearing in my writing, saying, ‘It’s your story, feel free to tell it as you wish.’ I can only return the compliment, while hoping I’ve given them slightly less material than my mother gave me. 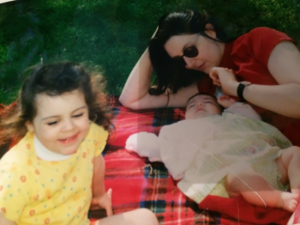 With Nina and Lara

Being mother to these two wonderful young women has left its mark on me physically and emotionally. It is the thing of which I am most proud in my life. So long as they both know that, then I am happy to read whatever they choose to write.

Catherine Simpson is the author of the outstanding memoir One Body: a retrospective, releasing on April 7 (Sept 6 in USA)