A Burns Supper Recipe by Sue Lawrence, author of The Green Lady

There are many traditional dishes served on Burns Night, and popular desserts include Cranachan, Tipsy Laird or Trifle. Cloutie Dumpling is another classic Scottish pudding, but rather heavy after a plateful of haggis, neeps and tatties

Trifle has a long history, the first recipe from the late 16th century, though this was admittedly more like a syllabub or fool than what we recognise as trifle today. Hannah Glasse’s trifle recipe from 1751 was for ‘Naples biscuits’, macaroons and ratafias to be laid in a dish, soaked in ‘sack’ (fortified wine), topped with custard then topped with a syllabub mixture instead of cream. Edinburgh chef Elizabeth Cleland’s 1755 recipe is similar, but she incorporates roasted apples and sweetmeats.  Another Scottish book, A Cooks Manual by Meg Dods (1829), describes the all-essential decoration which is similar to those in the previous recipes: ‘light flowers of fine colour,’ currant jelly or a sprinkling of ‘Harlequin comfits.’

My trifle recipe is one that Robert Burns might have eaten while being feted as a poet in Edinburgh, not growing up in Ayrshire with simpler fare. Dorothy Wordsworth, born on Christmas Day in  1771, and Anne Bronte, born in January 1820, probably enjoyed trifle too, since it was a dish eaten throughout Britain.

I have suggested Drambuie as the alcohol, but more conventional sherry is always good, as is ginger wine. A non-alcoholic alternative is orange juice. And instead of whipped cream as the final layer, make a syllabub by whipping cream with sugar to taste, a small glass of white wine and the juice and zest of a lemon. You can make this in one dish or several individual decorative glasses, ready to serve. 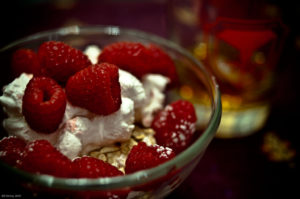 250g raspberries and a few to decorate

Spread the sponge halves with jam, sandwich them together and place in base of pretty glass dish. Scatter over most of the ratafias, reserving a few to decorate.

Slowly sprinkle over the Drambuie/sherry so the sponges/ratafia are just soaked, not drowned.

Top with raspberries, then pour over the cooled custard. Cover and chill, then shortly before serving, top with the whipped cream, swirling merrily into peaks.

Decorate with ratafias, raspberries and flaked almonds if using.