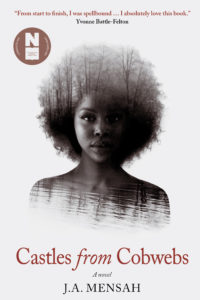 We are thrilled to announce that J.A. Mensah’s debut novel, Castles from Cobwebs, has been longlisted for the prestigious Desmond Elliott Prize.

The story of Imani, a foundling rescued as a baby and raised by nuns on a remote Northumbrian island, Castles from Cobwebs moves between Northumberland, Ghana, and the US to tell the story of a young woman’s search for answers, connections and identity.

‘From start to finish, I was spellbound by the characters (especially Imani), the narrative voice, and the vivid imagery. Mensah intricately weaves complex characters, vivid descriptions, universal topics of love, loss, identity, religion, with themes like the search for a place to belong, into a well spun tapestry, a mind-spinning tale, a heart-pounding novel – and I’m hooked. I absolutely love this book.’ Yvonne Battle-Felton, author of Remembered

‘I’m delighted to have been longlisted for the Desmond Elliott Prize. It’s exciting and an absolute honour for the book to be recognised in this way.’

‘I am absolutely thrilled for J.A. Mensah to have earned this well-deserved listing for such a prominent prize. From the very start, I was entranced by her magical, powerful novel, and it’s a real joy to see that it has been recognised by the Desmond Elliott judges.’