A diary of a Somerset spring: Skylarks with Rosie by Stephen Moss

As the first day of spring approaches, the anniversary of the first national lockdown looms. On this day – 16 March – last year Prime Minister Boris Johnson advised everyone in the UK against “non-essential” travel and contact with others, to work from home if possible and to avoid visiting social venues such as pubs, clubs or theatres. Pregnant women, people over the age of 70 and those with certain health conditions were urged to consider the advice “particularly important”. The rumours and speculation suddenly felt real. This wasn’t “just a bad cold” after all. And though we wouldn’t truly understand the gravity of the situation for weeks, it was the beginning.

Exactly a week later – 23 March – we were instructed that we must stay at home, except for certain “very limited purposes”. Everything stopped and the streets and roads became quieter than we’d ever seen them.

Our world is cribbed, confined and bound in as never before. Yet amidst all the fear and horror, there is one small but significant silver lining, as we reconnect with nature on our doorstep. My Somerset garden is awash with birdsong: chiffchaffs, wrens, robins and a new arrival, the blackcap, all competing to see who can shout the loudest as spring gathers pace. Overhead, buzzards soar and ravens tumble, as delighted as I am to herald the new season.

But to hear a bird whose song is the definitive sound of the countryside, I must take my daily exercise: a walk with our fox-red labrador, Rosie, around Blackford Moor, the little patch of land behind our home. I’ve seen some memorable birds here over the years. But as with any local patch, it’s all about the commonplace; and here, and especially now, the ubiquitous bird is the skylark.

A plump, triangular-winged shape rises up from the lane in front of us, then rapidly gains height, while continuing to deliver an outpouring of song: a rapid jumble of notes that seems to go on forever, even when the bird vanishes into the ether. As the dog and I stand and watch, I feel a new book coming on: Skylarks with Rosie.

Stephen Moss, along with all those who feel a deep affinity with nature, had been waiting for spring ever since New Year’s Day. But this spring would be unlike any other. As the world regressed into ‘what began to feel like the seemingly endless Sunday afternoons of [his] 1960s childhood’, he decided to keep a diary. A diary of a Somerset spring spent on his doorstep, walking the same loop for his daily exercise, and relying on the wildlife around him to make him feel better. However, it is more than simply a diary: 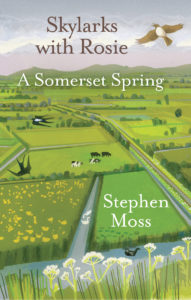 ‘It is, above all, a record of how the nation fell in love with nature at a time of existential crisis; and how nature, without ever realising it, helped us get through to the other side.’

A year on we are in an all-too-familiar position. But we have learnt, from the first spring lockdown, that we can get through it. And that engaging with nature, big or small, can help us feel better as spring unfolds throughout the country. Tune into the birdsong and notice the buds and shoots appearing. The cycle of nature reminds us that the world is still turning and that although everything has changed, life has not stopped.