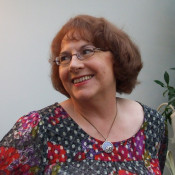 Catherine Czerkawska is a critically acclaimed writer of long and short fiction, non-fiction and plays. Her novels include The Curiosity Cabinet, The Physic Garden, The Posy Ring, Bird of Passage and The Jewel, about the life of Robert Burns’s wife, Jean Armour.

In 2019 Contraband published A Proper Person to be Detained, an intriguing exploration of family history that takes us from 19th-century Ireland to the industrial heartlands of England and Scotland. Following on from this, The Last Lancer is a personal account of loss and survival in Poland and Ukraine, a book with a tragic resonance, given the current situation in that country.

Catherine’s stage plays include Wormwood, about the Chernobyl disaster, and Quartz, both commissioned by Edinburgh’s Traverse Theatre. She has also written more than 100 hours of drama for BBC Radio 4.

She spent four years as Royal Literary Fund Writing Fellow at the University of the West of Scotland and when not writing, collects and deals in the antique textiles that occasionally find their way into her fiction.

A luscious historical novel, The Jewel brings to glorious life the dramatic years of Jean Armour and Robert Burns’s courtship, and their tempestuous, passionate married life, against a background simmering with political intrigue and turmoil.

Jean, a beautiful young woman with the voice of a nightingale, set young Rab’s heart aflame from the first. Jean’s father tried to protect her from the advances of the mercurial ploughman-poet, whose roving eye was notorious. But she would not be kept from him. Their marriage endured against all odds, its rocky course revealing Jean’s indomitable strength and character. How Jean lived with – and frequently without – her famous husband is surely Scotland’s greatest love story.

To accompany The Jewel, Catherine has also edited For Jean, a collection of poems, songs and letters by Robert Burns for Jean Armour.

From the author: book group questions for The Jewel

REVIEWS OF The Jewel

"Beguiling and enchanting ... I enjoyed this book so much that I read it twice." - Scottish Review

"Finally gives voice to Jeany Armour, the girl who sang as sweetly as the nightingale, who was muse, mother, wife and lover to Scotland’s national poet. This is her song." - Sunday Mail