Books > Fiction > A Book of Death and Fish

A Book of Death and Fish

Buy A Book of Death and Fish from

Peter MacAulay sits down to write his will.?The process sets in motion a compulsive series of reflections: a history of his own lifetime and a subjective account of how key events in the post-war world filter through to his home, Stornoway. He reveals his passions for history, engines and fish, and witnesses changing times  and things that don’t change  in the Hebrides. The novel is driven by its idiosyncratic narrator, but with counterpoints from people he engages with  his father, mother, wife, daughter, friends. It’s all about stories, a litany of small histories witnessed during one very individual lifetime.

REVIEWS OF A Book of Death and Fish

"A Book Of Death And Fish may well take its place beside Moby-Dick. It will, I suspect, be one of those books I will not put down all my days." - Candia McWilliam's Book of the Year 2014 in The Herald Read more

'It is a Waterland for the Outer Hebrides... it's a major landmark in fiction of the islands... it's a landmark in Scottish literature and contemporary fiction more broadly... It's a bright and vivid and true book, and a work of literature, unmistakably.' - Robert Macfarlane Read more

'It's absorbing and riveting. There's not a single paragraph in A Book of Death and Fish when we are not engaged by the vigour and jump and insistence of his voice.' - Kirsty Gunn. Read more

'Poignant...Stephen brings a contained concentration and intensity to his chapters that is mesmerizing and true in a deeper way...' - Tom Adair, The Scotsman. Read more

'A Book of Death and Fish is a testimony to the emotional power of story, both when told, and when blocked or restrained. It is a moving, very personal book.' - Donald Smith, Scottish Storytelling Centre 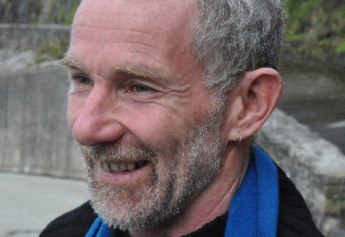 Ian Stephen is a writer, storyteller, artist and sailor from the Isle of Lewis in the Outer Hebrides. His prose, poetry and drama has been published around the world and garnered several awards, including the Robert Louis Stevenson Award. He was the first artist-in-residence at StAnza, Scotland’s annual poetry festival.